Alphabet, which backs diversity in all facets of technology, is helping to shed light on a specific project…a film called “CODEGIRL“. It comes via filmmaker Lesley Chilcott, who you might be familiar with from her work on “An Inconvenient Truth” and “Waiting for Superman.”

As an extension of Google’s “Made With Code” project, the new documentary is being shared, free of charge, on YouTube until November 5th. The film will be in theaters in the next few weeks.

Here’s Susan Wojcicki’s (CEO of YouTube) summary of the film:

“CODEGIRL” follows the story of 5,000 girls from 60 countries as they compete in a global entrepreneurship and coding competition by Technovation. The girls have three months to develop an app that attempts to solve a problem in their local community. In the film, they size up their competition, interact with teachers and local mentors, learn to code, and pitch their ideas all in hopes of winning $10,000 in funding and support.

Wojcicki cited optics as a reason for a lack of women who code and called out some of Google’s own research:

Girls don’t see positive role models of other girls and women in popular culture. In a study of popular films in 11 countries, fewer than 20 percent of computer science or tech roles were held by women.

YouTube seems to be a great place to launch this film, as AdAge just reported that some popular female YouTubers carry more clout than some mainstream celebs: 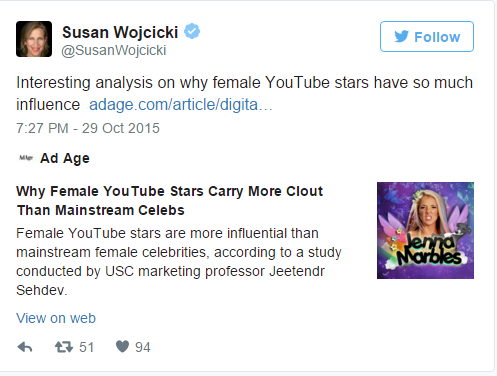 You can support the film by sharing it with the hashtag “#Rallyforcodegirl.”