Amid a bevy of Amazon-related announcements surrounding Kindle – some intentional (the arrival of Kindle MatchBook), some not (news of an updated Kindle Paperwhite leaked a bit early) – Amazon has also quietly launched a new storefront focused on Home Automation products, including things like programmable thermostats, smart locks, sensors, video monitors, and more. 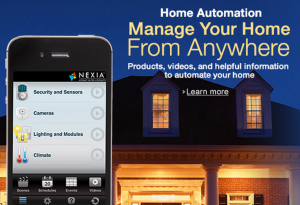 The new website aims to centralize the now numerous options involving smart home hardware and services under one roof, organizing products into broad, high-level categories, like “Energy Management,” “Entertainment,” and “Monitoring,” which you can then further drill down into via sub-categories like “Lightbulbs” or “security cameras,” “televisions” or “alarms,” and so on.

Additionally, Amazon’s Home Automation store is set up to be newbie-friendly with introductory guides to a variety of product categories like door locks, thermostats, and controllers, for example. There’s even a special section of the storefront that breaks out the “new and innovative” products from companies like Kwikset, Wimoto, SmartThings, and others.

In a rotating banner on the site’s homepage, Kevo, Nexia and Dropcam products are currently given special attention. 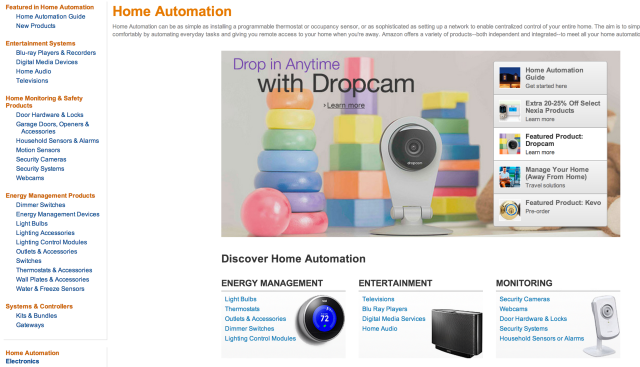 The automated house and digitally-controllable objects have long been a part of various “home of the future” visions, but is has only been more recently that we’ve begun to see a surge of devices with more mainstream appeal. Earlier home automation products meant complicated setups and larger investments on the part of consumers, but new products have shown that doesn’t always have to be the case. Plus, these devices themselves can add value to the home – not only financial in terms of saving money through smart management of electricity, for instance, but also in the look-and-feel of the home itself.

For example, the Nest thermostat showed that home automation hardware can include good design and aesthetic appeal. And Lockitron’s door locks are sleek and modern. Meanwhile things like Dropcam’s video monitoring solution for the home demonstrated that home automation didn’t have to involve a huge setup cost or complexity.

The ubiquity of cheaper broadband access, mini computers in the form of smartphones to control our devices, and lowered development and materials costs through crowd-funding and even more receptive VC audiences, have combined to help push the home automation movement forward as of late.

Today, tons of internet-of-things companies are finding support via crowd-funding like Piper, Canary, Ube, Beddit, Keen Home, Almond+, or KISI to name a few TechCrunch has covered. And how many smart locks are out there now? A lot. (See, e.g., Lockitron, Poly-Control, August, Goji, Schlage, or Kevo, to name just a few.) Even the big guys like Microsoft, Google and AT&T have been trying their hand in this market, to varying results. Now, Amazon wants in on that action, too, it seems.

You can check out the new Home Automation Store here on Amazon.com.