Human is a newcomer in the crowded fitness space, but its take is different. Instead of being a stat-heavy activity app like RunKeeper or a life tracker gadget like Withings, Fitbit or Jawbone, Human is a passive iOS app designed to help you stay healthy. The goal is to move for 30 minutes every day, and to keep up with this simple habit. The company calls it the ‘Daily 30′. As it is extremely simple, keeping up with Human is easier than with competitive fitness systems.

“The basic premise of the app is very simple. Human tracks all of your activity and we put the focus on how many minutes you moved today and how many minutes you need to move,” co-founder and CEO Renato Valdés Olmos told me in a phone interview. “Each day of the week that you reach your Daily 30, we send out a push notifications,” he continued.

The startup chose to develop a very simple app to appeal to a mass audience, with an emphasis on design. The UI looks great with an ever-changing background picture. Everything is animated, making you want to open the app every time you receive the Daily 30 notification. But the most interesting aspect of Human is the technology behind it.

Along with Moves, it is one of the first fitness app to use passive location tracking. You set it up once and forget about it. Then, it calculates your speed with your location and your activity with the accelerometer. But when you launch Human, it doesn’t show you a timeline of your activities.

The most interesting aspect of Human is the technology behind it

“Showing the user a chronological timeline of your daily activity is great for the first few days. But after a few days, the magic wears out,” Valdés Olmos said.

That’s why the app’s depth is hidden behind the big minute count. If you tap on it, you’re taken to the activity timeline. And if you tap on an activity, you will see a map, the duration, distance and average speed. You can share this on Twitter and Facebook as well. In other words, Human automatically tracks your activities like RunKeeper — but you don’t have to remember to launch the app.

Over time, the team plans to use all this personal data to improve your daily habits. For example, you can tell the app where your office, your home and your gym are. The service can then build up the basic pattern for user behaviors.

“The goal is to send a notification that says ‘get off the subway two stops early and you’ll be on time to work,'” Valdés Olmos said. When it comes to privacy, he was quick to reassure me. “We want to be a different type of company when it comes to data collection,” he said. Users can export and delete everything with a single tap.

The startup hasn’t closed its seed round yet, but multiple angels are already committed to invest hundreds of thousands of dollars in total. The app is available to iOS, but an Android version is coming soon. “We want to get as many people as possible to do the Daily 30,” Valdés Olmos said. 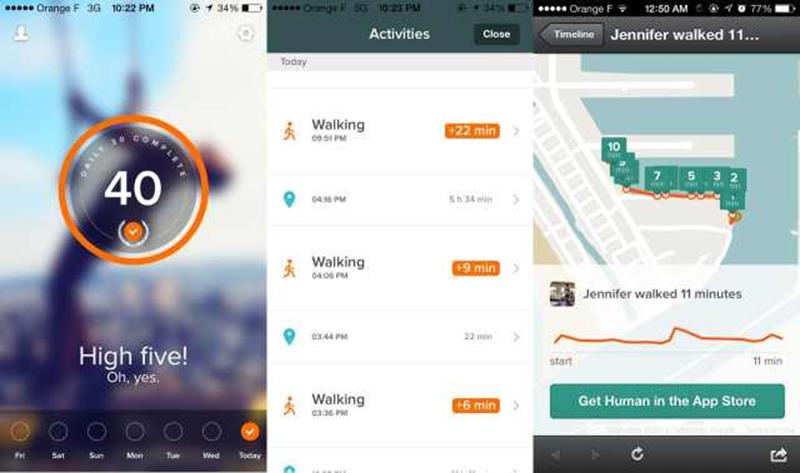