Azerbaijan released election results before voting had even started – oops 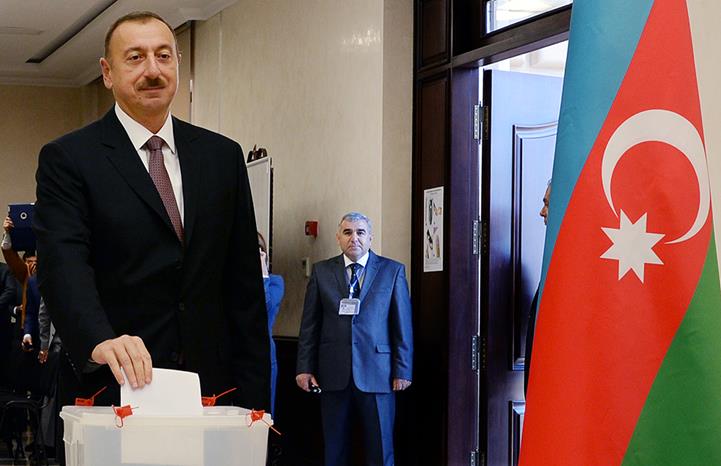 Azerbaijan’s big presidential election, held on Wednesday, was anticipated to be neither free nor fair. President Ilham Aliyev, who took over from his father 10 years ago, has stepped up intimidation of activists and journalists. Rights groups are complaining about free speech restrictions and one-sided state media coverage. The BBC’s headline for its story on the election reads “The Pre-Determined President.” So expectations were pretty low.

Even still, one expects a certain ritual in these sorts of authoritarian elections, a fealty to at least the appearance of democracy, if not democracy itself. So it was a bit awkward when Azerbaijan’s election authorities released vote results – a full day before voting had even started.

The vote counts – spoiler alert: Aliyev was shown as winning by a landslide – were pushed out on an official smartphone app run by the Central Election Commission. It showed Aliyev as “winning” with 72.76 percent of the vote. That’s on track with his official vote counts in previous elections: he won (“won”?) 76.84 percent of the vote in 2003 and 87 percent in 2008.

The Azerbaijani Central Election Commission sent out these vote totals to its official smartphone app before voting started. (meydan.tv)

In second place was opposition candidate Jamil Hasanli with 7.4 percent of the vote. Hasanli had recently appealed to the Central Election Commission for paid airtime on state TV, arguing that Aliyev gets heavy airtime and the opposition does not. He was denied.

The data were quickly recalled. The official story is that the app’s developer had mistakenly sent out the 2008 election results as part of a test. But that’s a bit flimsy, given that the released totals show the candidates from this week, not from 2008.

You might call this a sort of Kinsley gaffe on a national scale. (A Kinsley gaffe, named for journalist Michael Kinsley, is when a politician gets in trouble for saying something that’s widely known as true but that he isn’t supposed to say.) There’s supposed to be a certain ritual to an election like Azerbaijan’s: demonstrations are put down, reporters are harassed, opposition candidates are whittled down, supporters are ushered to the polls and then Aliyev’s sweeping victory is announced. They got the order wrong here.

As of this writing, Azerbaijan’s election authorities say they’ve counted 80 percent of the ballots, with Aliyev winning just under 85 percent of the vote so far. He’s been officially reelected.