Facebook is taking its standalone app strategy to a new extreme today. It’s starting to notify users they’ll no longer have the option to send and receive messages in Facebook for iOS and Android, and will instead have to download Facebook Messenger to chat on mobile.

Facebook’s main apps have always included a full-featured messaging tab. Then a few months ago, users who also had Facebook’s standalone Messenger app installed had the chat tab of their main apps replaced with a hotlink button that would open Messenger. But this was optional. If you wanted to message inside Facebook for iOS or Android, you just didn’t download Messenger. That’s not going to be an option anymore. 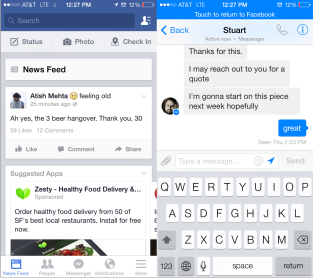 Soon, all iOS and Android users will have a hotlink at the bottom of their Facebook app that will open Messenger.

Notifications about the change are going out to some users in Europe starting today, and they’ll have about two weeks and see multiple alerts before the requirement to download Messenger kicks in. Eventually, all Facebook users will get migrated to this new protocol. And you can bet some users are going to be angry.

The only way to escape the migration is to either have a low-end Android with an OS too old to run Messenger, use Facebook’s mobile web site, or use Facebook’s standalone content reader app Paper.

In an onstage talk I did with Mark Zuckerberg in November, the CEO revealed an explanation for today’s change that Facebook’s PR team just referred me to:

“the other thing that we’re doing with Messenger is making it so once you have the standalone Messenger app, we are actually taking messaging out of the main Facebook app. And the reason why we’re doing that is we found that having it as a second-class thing inside the Facebook app makes it so there’s more friction to replying to messages, so we would rather have people be using a more focused experience for that.”

Essentially, Facebook sees Messaging within its main apps as slow, buried, and sub-optimal overall. Its numbers probably indicate that people message more and have a better experience on the standalone Messenger app.

But forcing users to adopt a new messaging behavior could be very unpopular. Not everyone wants to manage multiple Facebook apps on their homescreen or stick them in a folder. A portion of Facebook users may prefer to keep things simple with one app for everything Facebook, even if it means it’s slower and it takes more taps to get to their messages.

Facebook was criticized for its bloated main apps but this announcement seems like an over-correction, swinging wildly in the direction of each function having its own app. Obviously there’s merit to only having to maintain one mobile chat interface. It promotes faster feature development and better stability. And once users go through the chore of setting up Messenger and adapting to its style, they may enjoy it better. Personally, I like Messenger’s clean look and feel, playful sounds, and quick performance.

Still, a unilateral forced migration is the exact kind of change Facebook users hate, and this will only breed more paranoia that their social network could change without their consent. Taking a slower “We’re switching everyone eventually, so you might as well do it now” approach might have gone over better than “Your familiar chat interface will be destroyed in two weeks whether you like it or not”.

The only real explanation for moving this quickly is that desperate times call for desperate measures. Facebook is fighting a war overseas for the fate of messaging. While it bought WhatsApp for $19 billion, it still has to battle lean standalone messaging apps like WeChat, Kik, KakaoTalk, and Line. Unless forced, users might have stuck with the old Facebook app’s messaging interface instead of seeing there was something that could better compete with these other apps. That isn’t going to make this change much easier to swallow, though.