The developing world can’t join the age of social video since streaming sucks up too much costly data and is sluggish on slow connections. But Facebook wants to change that with a new video download option it will start testing on July 11th with a small percentage of users in India. While on WiFi, people can sync videos to their device for offline viewing within Facebook’s app.

Facebook is touting this as a win for video publishers, who might be grumpy about Facebook’s recent feed ranking algorithm change that prioritizes friends over pro content creators. “This will ensure a great user experience and allow your video content to reach new audiences” Facebook writes. 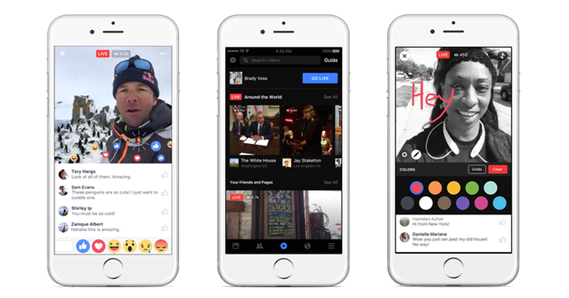 To prevent downloads from turning into piracy, Facebook is securely locking the videos within its app, and they won’t be visible in a device’s local memory. Publishers can also opt out of the feature to prevent people from downloading their videos via their Page’s Content Distribution setting. People can only download original videos posted by users on personal accounts or from Pages.

Rather than announce this on one of its blogs, Facebook buried the news at the bottom of an email to media publishers like TechCrunch about Live Video options like the ability to remotely end a broadcast by another team member or see analytics.

Opt Out option for publishers

“We’ve heard feedback that in markets like India, mobile data and internet connectivity is limited and many people struggle with poor video experiences. So we’re testing an option for people to download videos to Facebook while they’re online on good internet connections, to view the video at anytime, online or offline, without using extra mobile data.” 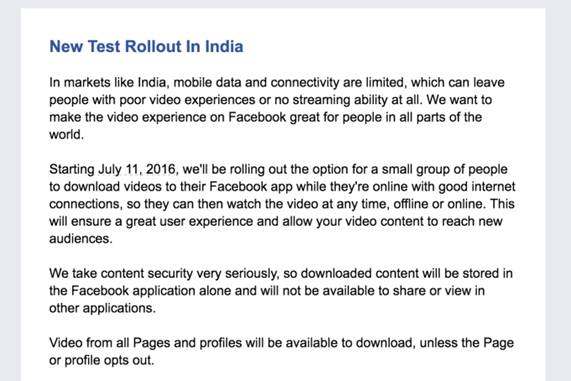 Facebook has been slowly bringing connectivity and rich media to developing world users with expensive data rates and janky cell networks. Today it announced its new OpenCellular wireless access platform to bring connections to remote areas, plus it has Internet.org’s Free Basics apps as well as drones and satellites that beam Internet to the outback.

The social network launched a special stripped down Android app called Facebook Lite in 2015. Then it built Slideshow, a new ad unit that combines photos into what looks a little like a video, but requires much less bandwidth.

“People are coming online at a staggering rate in emerging markets and, in most cases, are doing so on mobile” Facebook tells me. “We’re continuing to improve Facebook so it works seamlessly and easily for people in all parts of the world, regardless of their device.”

Together, these and other localized ad products have helped Facebook quadruple the average revenue per user it earns in the Rest Of World region since 2012. That’s critical since Facebook has maxed out its user count in many key developed countries, and must rely on emerging markets for user growth.

Bigger screens, better cameras, and faster connections have spurred an explosion of mobile video viewership in the Western world. Facebook hasn’t shared its daily video view count since it announced nine months ago that it had reached eight billion per day. You can bet that number is far higher now.

Video is the marketing format of the future. But video ads injected amongst text and photo content can feel interruptive.

By unlocking the ability to watch video offline, Facebook could acclimate developing world users to organic Facebook videos, thereby allowing it to slip in lucrative video ads without sticking out. Facebook says you won’t be able to download Sponsored video ads for now, but I’d imagine that could arrive in the future if the feature is a success and rolls out more widely.