Mac users get a desktop OS they can talk to.

Less than a month after it’s unveiling at Apple’s Worldwide Developers Conference in June, macOS Sierra arrived today for beta testers who have signed up to try Apple’s new desktop operating system. This is the third year in a row Apple has offered a public beta of an upcoming desktop OS.

This year the Mac platform gets some significant enhancements, with Sierra bringing one notable feature that promises to change how users interact with their Mac. After teasing users in 2015 with a revamped Spotlight in OS X El Capitan that understood sophisticated requests, Sierra finally brings Siri to the Mac.

Siri’s integration means you’ll be able to control certain functions on your Mac using natural language voice commands, and Siri on the desktop is just as functional as Siri on the iPhone, and with Mac-specific tricks, too. From what I’ve seen using the early Sierra betas, I expect to be spending more time talking to my Mac.

Siri is accessed from an icon in the Dock, by invoking a key command or from the menu bar.

Sierra gets more than just Siri

Sierra isn’t due out in final form until sometime this fall. But beta users, as of today, can check out the tweaks and additions the upgrade offers to make using your Mac a better experience. Those features include picture-in-picture for videos, better photo organization, improved device collaboration via the Universal Clipboard, iCloud Drive (which allows shared Desktop and Documents across all of your Apple devices), and Auto Unlocking your Mac when you wear your Apple Watch (running watchOS 3). 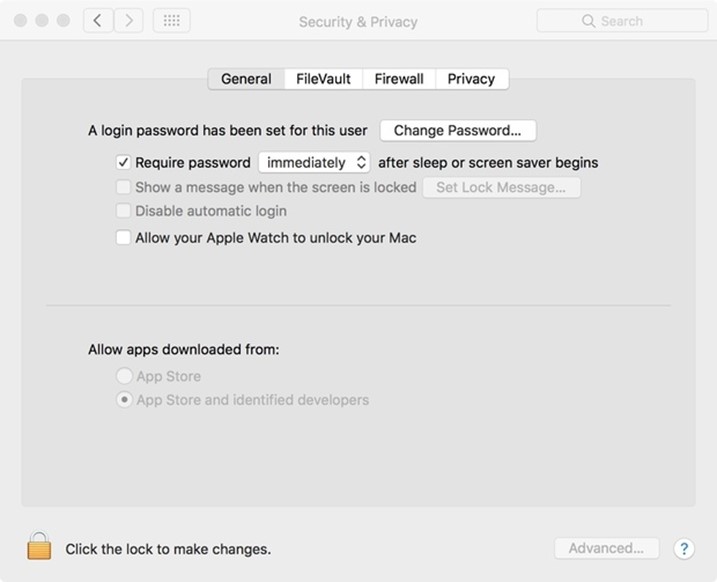 macOS Sierra will allow Apple Watch users to unlock their Mac automatically. (The option is tucked away in the Security preferences.)

But the biggest standout feature is Siri, which arrives on the desktop years after its debut as an app in iOS and then as a tent-pole feature for the iPhone platform. Apple now joins the ranks of other big-league developers, including Microsoft, Google and even Amazon, who are rapidly rolling out voice-activated features for their products. (FYI: Siri stacks up well against Cortana.)

Before I get into more details about Sierra, a programming note: If you haven’t signed up for Apple’s beta program but would like to, you can do so here. Just a warning: thisis a beta, so there will likely be issues if you’re running this operating system. Apple still has months of work ahead to bring Sierra to its final, shipping form. Remember: before you rush to install it, always have a backup of your computer, and never use a beta on production-critical hardware.

It’s been five years since Siri’s introduction on the iPhone. Since then, public acceptance of using voicing commands to control a device has slowly been on the rise. Amazon, Google and Microsoft all have virtual assistants now, and, for Apple’s part, the Siri technology has been expanding the use of voice commands in a variety of devices. Siri has bounced from the iPhone to the iPad to Apple TV and CarPlay. If history is any indicator — and by history, I mean Apple’s other product releases — Siri integration will absolutely change how you interact with the Mac — even if you’re still not sold on voice interaction.

Why? Because over the years, Siri has learned platform-specific tricks that make interacting with devices much more effective. For instance, when Siri is prompted on the Apple TV for a specific show, Siri searches across all supported apps and displays the relevant results, saving you the trouble of opening and poking around for that specific show. And on Apple TV, rewinding and fast-forwarding to specific spots isn’t much of an issue when you can tell Siri to just skip back or ahead with your voice.

Siri will be no different. It’s still as whimsical as it is on the iPhone (ask how it feels about living in a Mac and Siri might joke about living in an aluminum housing with no Windows). But there are a variety of new tricks that should be helpful for day to day users. 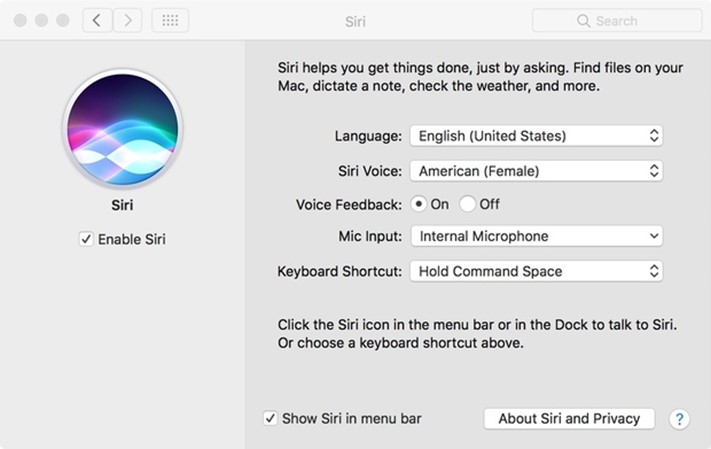 Siri’s new Preference pane under System Preferences allows you to customize it and change voices.

On the Mac, Siri is accessed from an icon in the Dock, by invoking a key command (Command-Space, by default) or from the menubar, next to the Notification and Spotlight icons. (The “Hey, Siri” voice invocation used in iOS – where Siri is always listening and can respond — isn’t yet an option on the desktop.)

Once active, you can use Siri to create appointments and reminders, send messages, ask for current or future weather forecasts, play a specific song (or an entire album or playlist), check sports scores, or even ask for directions. All of these requests work just as expected. However, I did have trouble getting Siri to bring up photos in my Photo Library, but I’m chalking this up as a bug. (Remember, as I’ve already noted: using a beta, even a public one, means you will likely encounter issues.)

Siri still provides online and local searches, and when performing local searches, it recognizes Finder tags, dates and other attributes. That allows you to perform specific inquiries you’d normally turn to Spotlight for. Since Siri does a decent job following a particular train of thought, you can refine searches with follow-up questions or requests. Just don’t be surprised if you get the occasional Siri sass. (During the WWDC keynote, Craig Federighi, Apple’s senior vice president of software engineering, asked Siri to bring up some files he was looking for and she noted that his “data filin’ was stylin’.”)

Even better, Siri can save your queries and the results in the Notification area for quick access later. That means everything from local file searches to sports scores can be pinned there for easy access later. And from these search widgets, you can keep track of specific files for that project you’re working on, drag and drop the results into live documents, or simply store sports scores for current games you’re interested in.

Other changes in Sierra and final thoughts

Of course Siri isn’t the only new feature in Sierra. Other useful additions include:

When Siri was first released, I mused that any technology hoping to gain mass appeal had to be good enough to change someone’s thought process from “Why are you using that?” to “Why aren’t you using that?” Siri’s capabilities and accuracy have grown over the years, and its features continue to evolve as the tech spreads from one Apple product to another. At the time, I wondered where the technology would go.

Now we know the answer: on our Macs. And now you can try it for yourself, months before other Mac users get their shot.