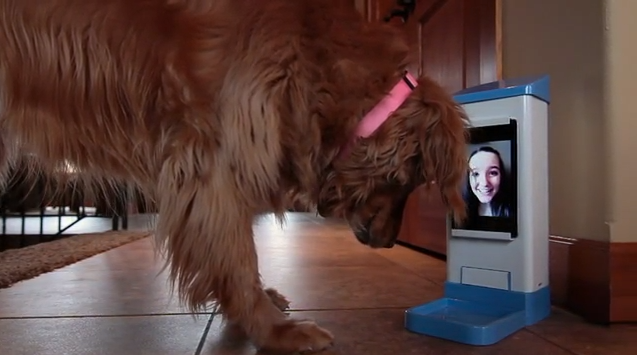 Last summer they covered Petzila’s answer to keeping a pet pooch happy when you’re not at home: a remote treat dispenser called PetziConnect which also let absent dog owners view and talk to their pooch while delivering treats from afar. Fast forward a few months and prepare to greet iCPooch: another gizmo aiming for the not-so-stay-at-home dog owner, but one which takes the remote petting to the next obvious level: doggy facetime.

iCPooch, currently seeking $20,000 on Kickstarter to go from prototype to production, provides a plastic housing for repurposing an Android/iOS smartphone or tablet as a video terminal through which you can see and be seen by your dog when you’re not at home.

So, to be clear, you’re going to have to provide the most expensive chunk of hardware required to power this device yourself, fitting it between iCPooch’s adjustable brackets. Although, your old smartphone that’s languishing unused in a drawer is probably going to be perfectly up to the task of treat-talking Fido.

As with PetziConnect, iCPooch holds pet treats (although it’s specifically designed for larger dog biscuits) that the owner can dispense remotely via the ‘drop cookie’ button in the corresponding app.

The differentiator is that because you’re using a smartphone/tablet, the app can also support placing a videocall (via Skype and piggybacking on your home Wi-Fi network) so you can view your dog while you send a treat, and — crucially — be seen by them. That’s one up on PetziConnect which included a camera and microphone so the owner could see and talk to the dog, but no screen to be seen.

Whether your dog will care as much for seeing your remote visage as receiving the tasty treats that materialise in iCPooch’s tray remains to be seen — and judging by the Kickstarter video, the dog’s Pavlovian attachment is likely to quickly transfer to the tray portion of the device, i.e. the place where the treat appears. But at least you get to pretend they’re really happy to see you. 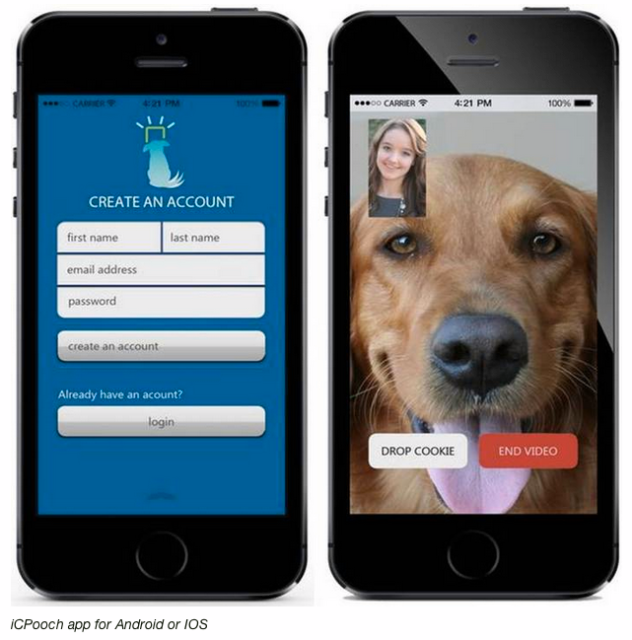 Also remaining to be seen: whether the remote sight and sound of a beloved owner, coupled with the tasty scent of dog biscuits wafting from a box on the floor, drives Fido into such a frenzy of excitement that he systematically deconstructs iCPooch, returning it to the constituent parts from whence it came.

iCPooch was apparently the brainchild of 14-year-old Brooke Martin, who is credited as inventor and spokesman on the Kickstarter project page, with her dad as founder and COO. The idea came to her after the family dog suffered “separation anxiety” as a result of everyone having less time to spend hanging out at home. Ergo she wanted a way to maintain some contact with the dog, when she was out and about.

The family startup is aiming to raise $20,000 on Kickstarter by March 4 to get iCPooch to market, with an estimated shipment date of this May. Early backers can bag the device for $99. But as noted above, that price-tag does not include the cost of the smartphone or tablet you’ll need to turn iCPooch from dumb plastic to working gadget.

(Petzila’s rival PetziConnect, which incorporates its own HD camera and Wi-Fi connectivity into the treat-dispenser, has not yet shipped but is due to arrive in early 2014. It’s available for pre-order costing $170.)