LinkedIn, the social network for professionals that was acquired by Microsoft for $26.2 billion, is today rolling out the latest product in its deepening relationship with its owner. The two are unveiling Resume Assistant, a resume builder in Microsoft Word that will be powered by data from LinkedIn — letting you import information about yourself and the companies that you have worked for into your Word document, tapping into some algorithms and artificial intelligence to help suggest wording and other items to help fill out your experience.

The feature will start to go live Thursday, first to Office 365 subscribers on PC (part of the Office Insiders program) and then more widely to other Word users in future months.

The move follows several other products that have come out over the last couple of months that have seen the two companies finally working more closely together.

They have included LinkedIn integrations into Outlook to enhance contact info in your email inbox, which was the first step in a bigger strategy announced in September of this year to integrate more LinkedIn data into Office 365 products.

There are a number of areas where we have not seen collaboration, but that could be ripe areas for it — for example Cortana integration into LinkedIn’s new “smart replies” feature that suggests replies and wording to people sending messages to each other; or Skype integration into the same messaging service to allow for voice and video calling.

What’s interesting with this latest development is that it taps into pre-existing strategies for both Microsoft and LinkedIn.

On the side of Microsoft, the company has been offering templates to Word users for years already, giving them prompts to help them create prettier and more useful documents in a program that — let’s be honest — has over the ages become weighted down with so many features, that no number of Clippy iterations or help windows will help you out quickly.

This will be one of the first instances of Microsoft not only giving you help with the format of a document, but with the content that goes into it, and a resume is a pretty important and often foxing document at that.

On the part of LinkedIn, it has a long history of working on ways to essentially mimic or even replace the function of a resume for its members.

This has included trying to forge closer ties with universities and other places of learning to help users tie in these very earliest stages of their career development, and a way to allow people to apply for jobs using their LinkedIn profiles as resume proxies for people to share their resumes with each other when applying for jobs.

Although Microsoft and LinkedIn are not talking about this explicitly as an exercise in artificial intelligence, there will be some assistant-like features incorporated into Resume Assistant. They will include suggestions for how to word items in your resume.

For example, once you begin to enter information, the assistant will suggest “insights from millions of member profiles so you can see diverse examples of how professionals in that role describe their work,” notes Kylan Nieh, a product manager at LinkedIn who worked on the integration. The same will apply for what kinds of skills you can describe yourself as having: you’ll get suggestions for these based on skills “other successful professionals in your desired role and industry have, so you can add them if applicable.”

The other area where the Resume Assistant will be proactive is in, well, giving you an idea of where to target your resume in the first place. The feature reverse-engineers to read what you have in your profile to suggest job listings to you that are relevant. “Along with job openings, you’ll see details of what the job requires, helping you to tailor your resume to a specific role,” Nieh notes.

You will also be able to turn on Open Candidates, the feature that lets you signal to recruiters only that you’re open to getting approached for a job, signaling another way that the two companies are coming closer together. 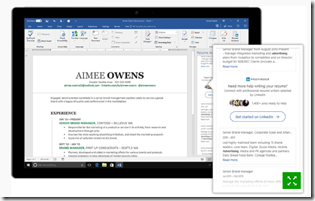