U.S. will only approve AT&T-Time Warner deal if CNN is sold

The U.S. Department of Justice may block Time Warner’s sale to AT&T if it doesn’t sell CNN first, according to a report from the Financial Times. The $85.4 billion deal was proposed last year, just weeks before the U.S. presidential election.

After Donald Trump was elected, some wondered if his disdain for the cable news channel would somehow thwart the deal. The FT is now reporting that this may actually happen. 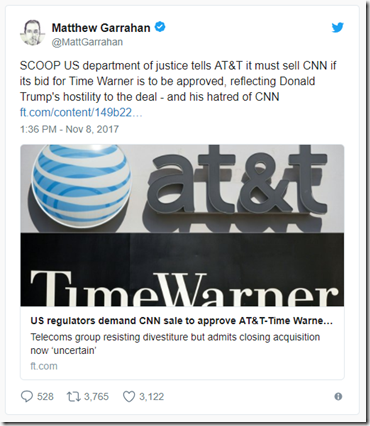 The FT report says that AT&T is opposed to selling CNN and plans to fight this in court.

The New York Times is now reporting that if AT&T doesn’t sell Turner Broadcasting, the group that owns CNN, it could be asked to sell DirecTV instead. AT&T purchased DirecTV in 2015.

AT&T CFO John Stephens acknowledged at a conference on Wednesday that the timing of the deal is “now uncertain.” It was originally expected to close by the end of the year.

In a press release following the conference, AT&T said its “discussions with the U.S. Department of Justice regarding the company’s acquisition of Time Warner are continuing. Stephens said he couldn’t comment on those discussions but that there is now uncertainty as to when the deal will close.”

It’s typical for large deals to undergo antitrust review to avoid unfair competition or monopolies. It’s not typical for the president to weigh in on a deal due to a personal grudge against a company.

Shortly before the election, Trump promised to block the deal if he were elected to office. At one point, he said the acquisition could “destroy democracy.” He later said “I haven’t seen any of the facts.”

In a recent post on TechCrunch, Senator Al Franken argued that that the sale of Time Warner to CNN is a “raw deal” that would be bad for consumers.

If CNN does not end up selling to AT&T, a long-time rumor is that it could sell to CBS. Earlier this year, CBS CEO Les Moonves said that he believes CNN could “enhance” CBS,  “but I don’t think that’s on the table right now.”