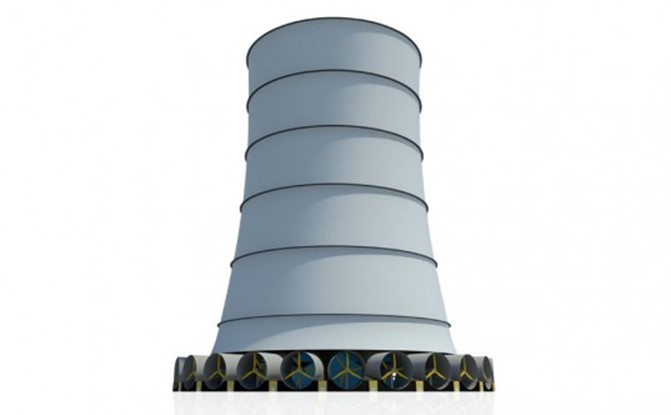 A Maryland-based energy company plans to build a gigantic tower that could tap solar and wind resources to generate 500 megawatts of energy. The Solar Wind Energy Tower is planned for a location on the Arizona-Mexico border, and it could be the second-tallest structure in the United States. The company plans to start construction by 2018.

The tower is likely to be located at a 600 acre site near the Mexican border and would take advantage of the arid climate – temperatures in the area regular reach 106 degrees. The huge concrete structure would use sunlight to heat the top of the tower and spray cool mist over the 1,200 foot wide diameter. Water evaporates and the cool air drops to the bottom at speeds of up to 50 miles per hour. This current pushes the air through a circle of wind turbines that produce energy.

Although the idea of combining solar and wind energy using tall structures has been around since the 1960s, the Solar Wind Energy Tower would be the first large scale implementation of the technology. According to the company, it is expected to bring thousands of jobs to the area.

Besides the fact that the structure requires a $1.5 billion investment, the reason why this technology hasn’t been implemented in recent years is connected to the potentially high cost of pumping water up to the top at a constant rate. Even so, the company recently won the local community’s approval and is going forth with their construction plans.