Most ISPs don’t deliver on their advertised broadband speeds

Verizon DSL faired the worst in an FCC study.

The majority of ISPs aren’t providing customers with the broadband speeds they’re paying for, according to the most comprehensive report on the issue to date by the Federal Communications Commission (FCC).

The FCC’s latest State of U.S. Broadband report shows that major ISPs deliver less than their advertised speeds to a majority of customers.

The report focused on four ISP technologies — DSL, cable, fiber and satellite – and examined offerings from 14 of the largest broadband providers, which collectively account for well over 80% of U.S. residential broadband connections, the FCC said. 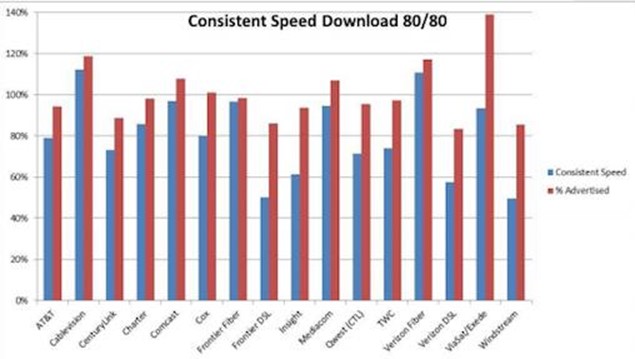 With the exception of Verizon DSL, CenturyLink, Frontier DSL and Windstream, all other ISPs met 90% of advertised performance or better, on average, during peak periods. “Notably, these four [slower] ISPs use DSL technology,” the study stated.

“Consumers deserve to get what they pay for,” FCC Chairman Tom Wheeler said in the report. “While it’s encouraging to see that in the past these reports have encouraged providers to improve their services, I’m concerned that some providers are failing to deliver consistent speeds to consumers that are commensurate to their advertised speeds. As a result, I’ve directed FCC staff to write to the underperforming companies to ask why this happened and what they will do to solve this.”

The FCC study noted that consumer Internet traffic is asymmetric, meaning more people download content than upload it. So, most service providers typically have far higher download than upload rates.

The FCC noted that Verizon offers upload rates as high as 35Mbps and Frontier offers 25 Mbps, more than twice that of the next ISP.

“With the exception of these two service providers, no other provider in the study offers rates that are higher than 10 Mbps,” the FCC stated in their report. “Several cable companies (Comcast and Cox) doubled their maximum upload rates this year from approximately 5 Mbps to 10 Mbps.”