Amazon has a reputation for having low prices, but that’s not always the case. Savings.com recently revealed via its price comparison tool that, half the time, Amazon had higher prices than its online competitors. Today, the company is furthering its price comparison efforts with the launch of an app that helps shoppers figure out where to buy for the lowest price across three categories. Called PriceJump like its web-based counterpart, the new app gives you the best online price, the best local (in-store) price, or – if you need the item right away and want to take advantage of your Amazon Prime shipping benefits – the app will find the best Amazon price, too.

Launching today in beta on iOS, PriceJump was spun out of Saving.com’s web tool called “Amazon or Not” Price Check, which has helped over 500,000 shoppers save since its launch this July. On mobile, the app takes on competitors like ShopSavvy, offering both a barcode scanner and a search box that returns real-time prices from Amazon and over 5,000 online retailers, as well as nearby stores.

These prices are presented to in three columns (Best, Online or Local), so you can determine which way you want to shop and then which store to visit or which link to click. With Local, I had to manually enter my zip code in settings for this option to work, which could be a bug. Your mileage may vary.

Even if you do most of your online shopping with Amazon to enjoy the convenience of free, two-day shipping with Prime, the PriceJump app can still be useful. Online retailers, and especially Amazon, don’t run sales the way traditional brick-and-mortar stores do. Instead, their pricing changes dynamically and often. While you may have been researching a big purchase and think you’ve found the best place to buy for the lowest price, by the time you return to the web to make your purchase, that price may have changed. 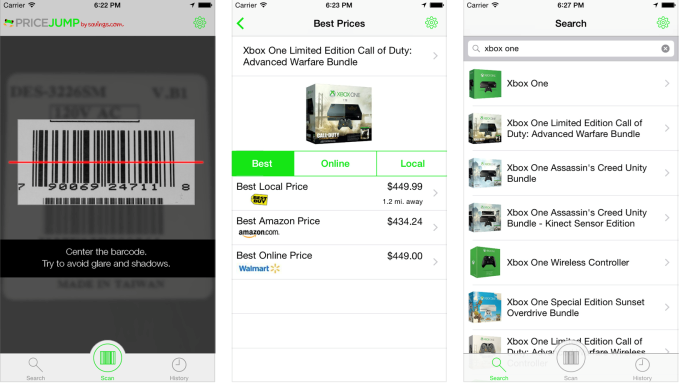 Notes Savings.com, they found that over a two-week period, the lowest price changed 10 or more times on nearly 20% of over 500 items they had been tracking since October. And the prices changed 5 or more times on 45% of the items.

The new app is less complex than top competitor ShopSavvy, which may either good or bad, depending on your use case. ShopSavvy has a heavy focus on pointing users to “sales” and letting them organize their wants into wish lists, while also surfacing item reviews, product information and related items. PriceJump, meanwhile, sticks mainly to price comparisons, though you can tap on the item itself to read reviews and a product description. But when all you care about is the dollars and cents of something you’re coveting, PriceJump’s simplicity makes it quicker and easier to use.

Well over half of U.S. consumers use price comparison apps to help them when shopping, and many stores will even price match with the web. Walmart, in fact, recently began officially matching online and Amazon prices, which could make the use of price comparison apps even more popular with shoppers.

Savings.com generates revenue by taking commissions on the sales it drives, and its current lineup today includes a couple of other apps aimed at helping shoppers save money. Its flagship app Savings.com provides coupon codes and deals, while its Favado app help you find the best grocery deals. (The latter is especially popular among extreme couponers, myself included, as it shows you how to stack coupons and match them with store deals.)  PriceJump, however, has a more modern and cleaner look-and-feel than the company’s earlier apps, which also makes it easier to use*.

The new app is available as a free download, here on iTunes.

* Though it needs to tone down the shade of green, a commenter points out. But in comparison with its Favado app, which is ugggghhhly, this is progress for them.