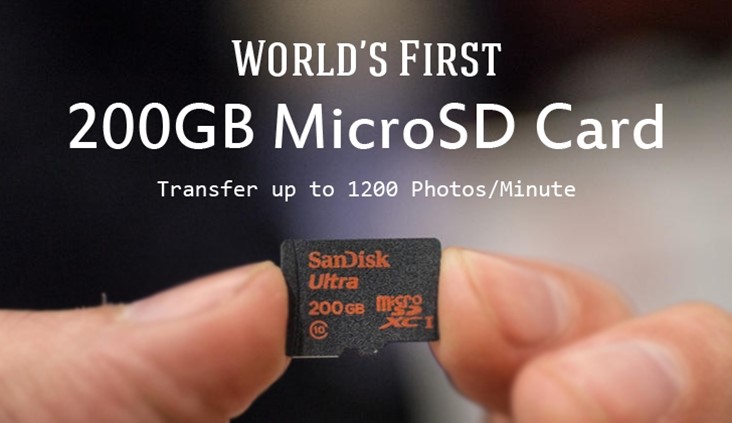 There isn’t any troll in the title. The “World’s Largest microSD” card sized at 200GB is now officially available for purchasing from Amazon and number of retailers.

So, Is your 16GB, or 32GB, or even 64GB smartphone not enough to store all your data in one place?

Order a Sandisk’s new high-capacity microSD card from Amazon now. However, the only issue is that it is not exactly very cheap. You will have to pay around $240 to buy one.

Back in March when Sandisk first announced the world’s first 200GB microSD card, it was expected to be priced at around $400. However, $240 has been marked as the price for the highest-capacity microSD card available in the market.

Sandisk’s 200GB microSD card, or Ultra microSDXC UHS-I card, offers a transfer speed of up to 90MB per second, which is double the speed provided by its 128GB counterpart.

The company claims that the speed will allow you to transfer up to 1,200 photos in just a single minute. The card is something of great use for photographers and filmmakers who need more storage capacity to store high-resolution photographs and videos.

Furthermore, the 200GB MicroSD card is waterproof, shockproof, temperature proof, magnet proof and X-ray proof to deal with any possibility of destruction.

However, if you can not spent this much for 200GB of storage space, there always remains an option for you to buy a 128GB MicroSD card that still provides you plenty of space and costs as much as $80.