Amazon’s ‘Write On’ Crowd-Publishing Platform Opens To All 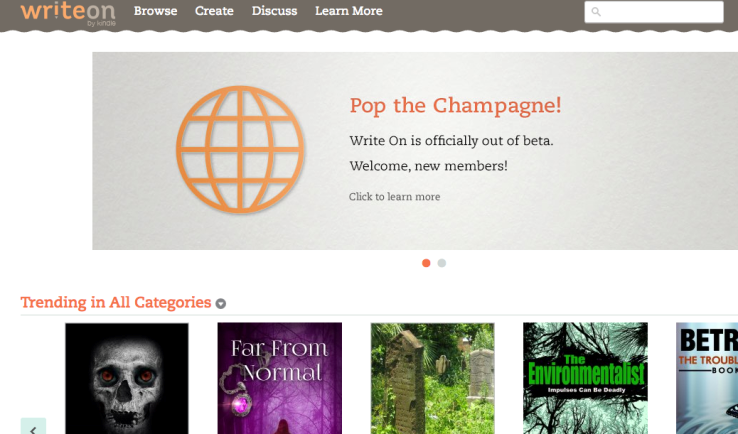 Amazon has a new crowd-publishing platform called Write On, which is a direct competitor toWattpad, the social network with self-publishing authors offering up their content for free, and working together with the community to incorporate feedback into their ongoing work. The Amazon version launched last October as an invite-only beta, but now it’s a full-fledged product available to all, and the beta label is gone.

The Amazon platform allows anyone to share anything they’re working on at any stage. They can offer full works, chapters, outlines, vague character sketches or even just single snippets and poll the community for feedback. You don’t have to write to participate, either – anyone who wants only to read has plenty of content to browse and nibble on, organized by genre, and there’s a “shuffle” feature that brings you to a random work.

Amazon has a lot of catching up to do to match Wattpad’s engagement – the nine-year old company has 40 million active users on the network monthly, according to its latest shared stats, and those members post over 24 hours’ worth of new material for reading every single day.

Write On isn’t Amazon’s only product that looks to leverage crowdsourcing to serve readers – the company also recently launched Kindle Scout, where authors can submit completed manuscripts to be vetted by the user community, and to be potentially chosen based on crowd response for digital publication by Kindle’s publishing arm. In theory, then, you could start, write and fine tune a book on Write On, submit it to Scout, and have it made available for sale, all inside Amazon’s ever-loving embrace.